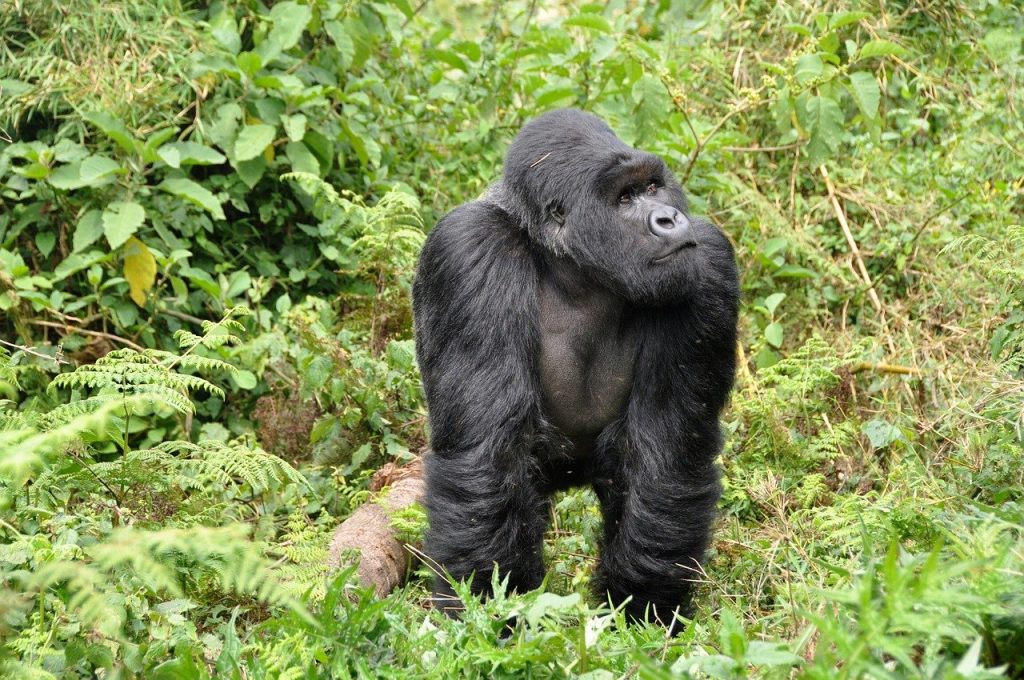 “It was fascinating just to see [gorillas] in their habitat, just chomping on bamboo and the babies rolling around with their little feet in the air ... We saw one gorilla mom with a baby that was only one month old and the way she was cradling it, with such love and care, was incredible. It just warmed your heart.” –Andrea Ortega, Coastline Travel Advisor

We found Africa’s hidden gem — a perfect blend of historic reconciliation, National Parks with volcanos and the “Big Five,” a lake so vast it looks like the ocean, and treks to see gorilla families in the wild.

Rwanda, tucked between Lake Victoria and the Democratic Republic of the Congo, is Africa’s hidden gem. With a history of violence, Rwanda is often overlooked as a tourist destination. But the genocide ended 25 years ago and the country has since transformed into a progressive safe haven filled with nationwide respect.

“I will tell you that it is the safest country in Africa,” said Andrea Ortega, a Coastline Travel advisor. “I honestly feel more unsafe walking through L.A. or New York than I ever did walking around the streets of Rwanda. That was a big surprise for me — it’s so safe and so clean.”

Ortega was invited by the Rwanda Development Board to experience highlights of the country with 26 other travelers from around the world. What she did not realize, was how much this trip would change her worldly perspectives.

Rwanda is known for its large gorilla population and the 1994 genocide. A crucial part of the trip is understanding Rwandan culture and the tainted history of the genocide against the Tutsi. One of the first stops is at the Kigali Genocide Memorial, an educational hub and cultural center.

“It’s absolutely heartbreaking, but it’s an essential part of the visit to understand the country and also to understand where the people are coming from,” Ortega said. “And to see people living side-by-side now and not caring whether you’re Hutu or Tutsi is really astounding because it’s only been 25 years since the country went through this turmoil.”

Travelers will also see reconciliation villages, where survivors live among ex-perpetrators in a way to connect and educate visitors of their history. These villages are also used to discuss culture and provide counseling sessions. Ortega met survivors whose parents died in the war and are now in reconciliation villages to share their story, forgive and learn how to move on.

For an adventurer’s highlight, no trip to Rwanda is complete without canopy walks and visiting National Parks to search for the “Big Five.”

Akagera National Park has it all — woodlands, savannah grasslands, mountain habitats, and the “Big Five.” Like the animals on your childhood bedroom wallpaper, the “Big Five” includes lions, elephants, rhinoceroses, leopards, and African buffalos. Akagera reintroduced lions and rhinoceroses in 2017, making the park a tourist highlight for animal sightings and bird watching. And if you’re looking in the right spot, The Akagera River has one of the highest concentrations of Hippopotamuses.

But remember to keep your distance.

Nyungwe National Park, in the southwest, is entirely different but also worth a visit. Nyungwe is Africa’s largest protected mountain rainforest known for its diverse animal and bird species. It is also home to the only canopy walk in East Africa, on 70 meter high bridges that span across the tropical rainforest with the chirping birds. This is the best place to see chimpanzees and other monkey species in Rwanda.

Ortega took note that the canopy walk was not necessarily difficult, but visitors should be alert and mobile — the bridges were slippery, covered in rainforest dew. It was on this excursion where Ortega realized a raincoat would have been a good packing tip.

It did not rain often, but when it did, it rained hard.

Rwanda is a country with a rich culture that is not solely defined by its history and wildlife.

Azizi Life is a community experience offered in Muhanga, a district in the northwest near Lake Kivu. Community members show tourists a day in the life of a Rwandan, including learning about traditional pottery, construction, and cooking. They also show tourists cow manure art, known as Imigongo, which is a technique to place geometric designs on canvasses, pottery or walls.

“Even though it was still geared toward tourists, it wasn’t hokey. There’s not that much tourism yet in Rwanda to spoil it,” Ortega said about her Azizi Life experience. “We were out on a dirty, bumpy road and they definitely lived in these homes, so if you want to see their bedrooms, they’ll show you. It was definitely interesting and not done up — it was the real deal.”

Rwanda is also known for its coffee and tea plantations. There are coffee plantation tours offered to both the coffee connoisseurs and amateurs alike. As one of the top 30 countries in the world to produce the finest coffee, watching the production process and trying out coffee samplers is a good morning excursion.

One of Ortega’s guides informed her that after the genocide, Rwandans developed a sharp sense of discipline. He told Ortega that communities adopted a code of conduct they all believed in and became the “Switzerland of Africa,” so to speak. So on the last Saturday of every month, communities participate in a monthly neighborhood clean-up — either with building development or projects to help preserve the environment. Ortega and the other tourists in her group were able to help with the clean-up and spent their day constructing a community building.

And for all the feminists, Rwanda is the number one country with the most female representation in parliament. Just throwing that out there.

For the vacationers and the adventure-seekers, Lake Kivu caters to everyone’s travel needs. Lake Kivu, on the western border of Rwanda and the Congo, is one of Africa’s Great Lakes. Much like the Great Lakes on the U.S. and Canadian border, Lake Kivu is so large it has the ocean’s appearance — rolling waves into the sunset with the occasional island splitting up the vast body of water. On the lake, tourists get to experience a sunset boat tour with local fishermen, as well as explore several of the islands.

There are also kayak rentals, but it is not advised to go swimming in the lake. While there are no real animal threats, the waters are untreated and it’s best to enjoy the lake sunsets from land or on boats. Ortega noted that the lake was gorgeous and would definitely recommend a visit.

“The rooms were basic but it felt like I needed to stay there because of the history. Beautiful views of the city, the food was good, service was good, I had a nice massage out by the pool which was super reasonable and that was a nice way to finish a long, long trek it took to get there.” –Andrea Ortega, Coastline Travel Advisor

There is only one event that will bring together Paul Kagame, the Rwandan President, and the early-2000s hit American singer-songwriter Ne-Yo (“Let Me Love You”) — that event is the annual “Kwita Izina,” or the Mountain Gorilla Naming Ceremony near Volcanoes National Park.

Each year, around the first week of September, the national park celebrates the birth of baby mountain gorillas. Babies are given names as a way to monitor each in the wild, as well as to expand the development of tourism and wildlife conservation. This year the event fell on Sept. 6, and like every year, guests across the world are invited to join — including Ne-Yo as entertainment.

As one of the country’s most popular events, community members in neighboring towns and villages walk miles to attend the ceremony. Ortega described the event as festive, with professional dancers performing to Rwandan pop music. Other big-name guests include Princess Basma of Jordan, English model, actress, and businesswoman Naomi Campbell, and Dutch football manager Louis van Gaal.

Each guest gave a speech which ended in naming one of the gorillas. This year’s ceremony had 25 newborn mountain gorillas. Ortega’s favorite name was given by Louis van Gaal. He named a gorilla Ingogozi, “as a tribute to the remarkable recovery Rwanda has made, thanks to the country's influential leadership that's promoted unity and peace since 1994.”

If scheduling can be flexible, visiting Rwanda at the time of a Kwita Izina is one of the most memorable experiences. Plus, mid-September is still in the dry season, which is the best time to visit the country.

The slowest tourist was in the front, setting the pace for the rest of the crew. There were eight tourists, a few trekkers (one was armed), one park ranger and several hired porters, or men to carry bags and help tourists with the steep terrain. Everyone had a bag full of water and snacks for the trek.

Ortega chose the medium trek, which meant three to four hours of hiking up steep terrain, climbing about 9,000 feet in elevation, and one hour with the gorillas — but every tour included one hour observing the gentle giants in their natural habitats. Some tours have a lower elevation climb and are more mobile-friendly, so all ages can enjoy the gorillas. Ortega took note when they passed from fields to muddy trails, then to walk through a bamboo forest. The terrain was diverse and ever-changing.

Volcanoes National Park in the northwest is Rwanda’s most iconic tourist attraction. With their developed infrastructure, it holds the safest, most tourist-friendly excursion to see gorillas in the wild. The trekkers are rehabilitated poachers and have a passion for teaching others about the negative effects of poaching in Africa. As they walk higher up the rolling hills and bamboo forests, the trekkers discuss poaching while holding machetes, for the safety of the group as a precaution to other animal threats.

And then, they arrived. The trekkers told Ortega and the others to put down their bags but bring their cameras. Ortega rounded one final hill and stopped in her tracks, amazed to see something she never thought she would see.

The group was standing in front of about 20 gorillas of all ages, chomping on bamboo and rolling in the grass. One gorilla held a one-month-old baby in her arms. The trekkers made noises to let the gorillas know that the group was not a threat. Ortega described the noises as someone clearing their throat.

“It was fascinating just to see them in their habitat,” Ortega said. “We saw one gorilla mom with a baby that was only one month old and the way she was cradling it, with such love and care, was incredible. It just warmed your heart.”

Ortega never once felt threatened or unsafe. The trekkers and park rangers gave clear instructions to give the gorillas space, and if they approached, to slowly walk away.

And in a blink of the eye, the crew took their final photographs and turned back down the rolling hills to return to the base camp and head back to their respective hotels. From 8 a.m. to 4:30 p.m. was an excursion of a lifetime — one that Ortega would hold onto and cherish forever.

As Ortega said, “I really feel Rwanda is a hidden gem.”

While this trip includes multiple accommodations, Ortega gives her hot take on the top 5:

The Fourth of July is a monumental day for our cou

We have such inspiring travel advisors on our team

This Memorial Day, we remember and profoundly appr

If you’re not a Monaco fan, after seeing these p

Are you a city or beach person? We can tailor your

Our travel advisors are the best because they unde

This is your chance to secure a FREE 2-category su